'No respect, umpires put under pressure' 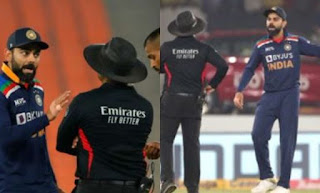 Virat Kohli is a player who gets angry easily and shows it on the field. As he became a captain, that behavior became more noticeable. At times, Kohli even gets angry with the umpires. In the series against England, Kohli was often seen irritating the umpires. Cricket legends are now coming out against this.

Former England cricketer David Lloyd has accused Indian captain Virat Kohli's misbehaving with umpires. Lloyd said Kohli was behaving in a way that put pressure on the umpires and did not give him the respect he deserved.

Kohli had earlier alleged that the England players had influenced the umpires to call a soft signal when India were batting in the fourth T20I against England.