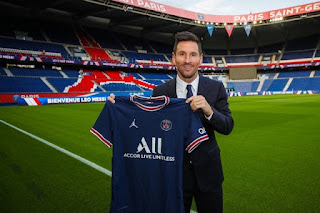 The day has finally come, and PSG fans will be able to call Lionel Messi one of their own.

The Argentine ace has finally put pen to paper to his new deal with Les Parisiens, which will see him dominate at Parc des Princes for the next two seasons. Messi, who left Barcelona after 20 years (considering his days with the lower-tier teams), will reportedly become the best-paid player not only for PSG, but also for a Ligue 1 footballer.

Messi's arrival to Paris caused quite a stir, with fans gathering near the hotel where he will stay until he finds a suitable home for him and his family. But once he completed his move from Catalunya to the French capital, there was only one mystery to solve: the jersey number he was going to use with Les Parisiens.

Given that Neymar wears Number 10 and he reportedly rejected to wear that jersey, fans, experts, and even casinos were wondering which number he would settle for. The answer was provided by PSG in a two-minute video used to unveil "La Pulga".

It is yet to be seen when Messi will make his debut with the Ligue 1 side, as he chose to end his vacation last week while waiting to sign his new deal with Barcelona (something that never happened). The player's debut could take place either against Strasbourg on August 14, or against Reims on August 20. Either way, it will be quite interesting to see how fans around the world react to watching Messi with a different jersey than the one that made him a worldwide icon.