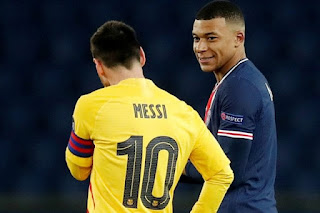 The ramifications of Lionel Messi's shock departure from Barcelona could stretch beyond the Camp Nou or even PSG, his next destination. According to reports out of Spain, a move to the French capital could result in a domino effect that could see Kylian Mbappe seal a move to Real Madrid.

The Argentine icon bid an emotional farewell to the Blaugrana over the weekend in a press conference, calling the curtains on his 21-year stay in Catalonia. Shortly after his exit was confirmed, links to the Ligue 1 giants emerged, with the six-time Ballon d'Or winner completing his move to Paris on Tuesday.

However, once this move became apparent, many began questioning how Pochettino's side can sign the likes of Messi, Ramos, Donnarumma, and Wijaldum while continuing to pay Neymar, Mbappe, Di Maria, and their star-studded squad without running into FFP issues. According to AS, the answer is they can't.

The Spanish news outlet claim the French giants cannot have all three of Messi, Neymar, and Mbappe without crossing UEFA's Financial Fair Play regulations. As a result, the club will need to raise just over $200M in player sales in order to avoid trouble.

Due to this, Real Madrid have grown confident in their odds of signing the French superstar. Selling the Parc des Princes deadwood will not be easy but cashing in on the 2018 FIFA World Cup winner shouldn't pose a problem. Los Blancos already have a $138M transfer budget to spend this summer which could be blown on the former Monaco sensation.

Initially, Real Madrid opted against actively pursuing Mbappe in order to avoid tarnishing their excellent relationship with PSG president Nasser A-Khelaifi. However, Florentino Perez looks to change this and will now make an official approach.

Despite entering the final year of his contract, Les Parisiens remained adamant that they would not sell the 22-year-old. However, the addition of Messi could change things in the French capital.